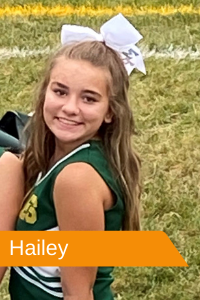 “We were on our way to the local swimming pool, and the next thing you know, we were upside down,” recalls Hailey’s dad, Michael.

On July 11, 2018, Hailey’s entire family was in the car when they were hit by a distracted driver that ran a stop sign going 55 miles per hour. The car flipped and went through a telephone pole. The impact was on Hailey's side and they immediately knew things were very bad.

In the blink of an eye, the ambulance was there, and they knew they wouldn’t be able to get Hailey quick enough to the hospital, so they brought in the life flight.

Hailey was air lifted to Nationwide Children’s Hospital and from the time of her arrival, the staff was doing everything they could to help her and her family. The doctors and nurses explained that that Hailey had suffered a traumatic brain injury. Her parents were warned that their daughter may not make it through the night.

“There was one doctor that came into the Intensive Care Unit and said, “She’s going to walk out of here.” To this day, I would believe this doctor if he told me she was going to create miracles, I would trust him. The confidence in that doctor was the best thing that could have ever happened to us,” says Michael.

After 11 days on a ventilator and two and a half weeks in the Intensive Care Unit, Hailey was moved to the Neurology floor to work on rebuilding her motor skills. It was not until she moved to the Rehab floor that Hailey began to talk, walk and eat solid foods again. The therapists on the Rehab floor pushed Hailey to find herself again.

“When I was in physical therapy and I was learning to walk again, my therapist turned around for one second, and I was able to walk down the ramp by myself,” says Hailey.

Hailey was at Nationwide Children’s Hospital for a total of seven weeks. Her mother, Ashley, says, “Nationwide Children’s Hospital saved Hailey’s life. We would not be where we are today in her recovery without the staff. From being told that Hailey may never wake up to where we are today is amazing. She defied all odds and is back to being a kid again.”

Hailey loves NASCAR and racing her own race car. She is also a cheerleader at World Cup Ohio. Hailey will be cheering on all the participants in the Meaningful Miles Challenge and can’t wait for race day in 2021.