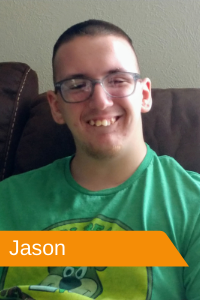 I am a Champion for all kids!
Please consider donating to my page!

Jason was born with Trisomy 15, a rare chromosomal condition. Doctors told Jason’s parents that they had a better chance of winning the lottery than Jason surviving.

For ten years, Jason thrived and only had focal seizures which occur in one hemisphere of the brain. In 2012, he had his first grand mal seizure and was admitted to his local hospital. He was then referred to Nationwide Children’s Hospital where he underwent numerous tests and was diagnosed with Epilepsy.

In order to treat Jason’s Epilepsy, his physicians recommended a Complete Corpus Colostomy, to prevent the seizures from spreading from one half of the brain to the other.

Jason spent 60 days inpatient at Nationwide Children’s Hospital after his surgery. He had re-learn every part of his life. He didn’t talk for 26 long days, he had to re-learn to feed himself and walk. When you ask Jason’s mother, Julie, about her experience at Nationwide Children’s, she says, “We are so grateful for Nationwide Children's Hospital. The love and care they gave our family at a very difficult time, it’s worth the two-and-a-half-hour drive and they are always a phone call away. If it wasn’t for his specialists, he wouldn’t be where he is today.”

Jason and his family travel to Nationwide Children’s Hospital regularly for his rehab therapies. His dad, John, says, “He doesn’t even think he has a disability. He just goes with it. He thinks he’s a normal kid and we love it. I’m just glad he’s the way he is.”

Since returning home, Jason has fallen back in love with his favorite sport of football. He is his high school team’s biggest fan and is on the sidelines every Friday night supporting them. Jason’s positive attitude and spirit will inspire all who participate in the Meaningful Miles Challenge in 2020.