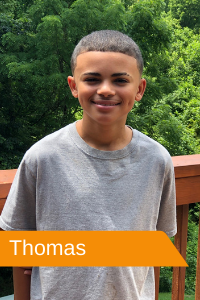 When Thomas was born, he suffered from severe GI symptoms and failure to thrive. He continued to struggle with feeding, food/formula intolerances and experienced countless hospital stays.

Shortly before the age of two, Thomas was hospitalized locally in his hometown of West Virginia. His health was deteriorating, and he was transferred via ambulance to Nationwide Children’s Hospital’s GI unit, under the care of the motility team.

Thomas remained inpatient for four months, having countless tests run, resulting in a handful of surgeries. It was uncovered that not only was he struggling with GI motility issues, he was struggling with significant bladder issues as well.

Over the next handful of years, Nationwide Children’s Hospital became Thomas’ second home. His mother, Shanda, says, “We’ve spent about 40% of his life inpatient, continuing to struggle with severe constipation, feeding intolerance, failure to thrive, bladder and kidney infections. When we weren’t inpatient, we were on the road, making the three-hour drive to outpatient clinics multiple times a week.”

Over those years, they discovered Thomas has many true anaphylactic food allergies, as well as intolerance to many foods. He has a neurogenic bladder with kidney reflux resulting in multiple surgeries for a mitrophinoff and sacral nerve stimulator. First, he had an ileostomy placed to later be taken down for a cecostomy tube. He also had a significant portion of his large intestine removed. They eventually discovered he had osteoporosis and began regular infusions with the bone clinic.

Fast forward to 2012 when he had the portion of his large intestine removed at age six, they slowly began to see improvements. For the first time, Thomas was spending more time at home than inpatient. Now at age 14, Thomas is having successful cecostomy flushes, is voiding on his own most of the time and only using catheters intermittently. He is gaining weight and growing well, for the first time in his life!

Thomas is still restricted in his diet and abilities, but his family makes accommodations to suit him and he is thriving!

Thomas enjoys watching WWE (Bray Wyatt is his favorite), Lebron James, cheering on the Washington D.C. professional football team and playing basketball and video games. Thomas and his family will be cheering you on loudly throughout the Meaningful Miles Challenge. We know Thomas will provide you with the strength and positivity to keep going.