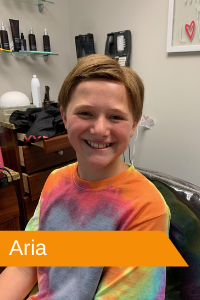 In the summer of 2019, Aria had a small bump on her head. At the time, her parents weren't concerned, it was just a small bump and she was an athletic child. However, within just a couple months the bump got larger. Aria also began having headaches and was missing routine throws and catches during softball. Through the advice of her doctor, her parents scheduled an MRI to get to the bottom of it.

Aria was just ten years old when she was diagnosed with Ewing’s Sarcoma, a very rare and aggressive type of bone cancer, in her skull. Aria’s father, Jim, says, “From that moment on, everything was a blur. Biopsy, port installed, chemo regimen, lots of conversations with doctors, lots of questions and lack of knowledge.”

One thing that Aria recalls is how the nurse's brought a huge basket of candy and stuffed animals into her room before she received the news. When she saw the big basket, she had a feeling they didn't have good news for her.

At the beginning, Aria was very scared. Scared of how hard it would be and how she would take the treatment. She remembers being tired all the time. Tired of everything... school, friends, cancer, hospitals, hospital food, people asking if they could help, being the center of attention, being the 'cancer girl'.

Aria did her best to keep her spirits high during treatment. She participated in softball practices when she was up for it, watched her brother's football and/or hockey games, loved having visitors, did online e-learning, and took advantage of the child life services activities. But as her treatment progressed, Aria’s spirits were lower as her body was breaking down. The only thing that kept her spirits up was hockey and the Columbus Blue Jackets. Watching the Blue Jackets kept her mind off chemo. She attended playoff games and even got Cam Atkinson’s jersey off his back. These moments are what kept Aria fighting her battle against cancer.

Aria loves softball, playing piano, theater, singing, and rooting for the Columbus Blue Jackets. She is so excited to be a Patient Champion for the Meaningful Miles Challenge so she can share her story with other kids facing difficult medical situations.