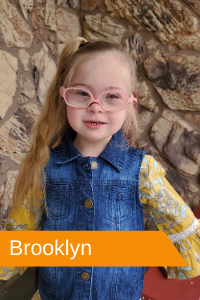 Brooklyn’s been a fighter since the day she was born. For her first year of life, she was only given a 20 percent chance of survival. She was diagnosed with several heart defects – Truncus Arteriosus type 2, Ventricular Septal Defect (VSD), Atrial Septal Defect (ASD) and Pulmonary Artery Stenosis – as well as Down Syndrome.

At six days old, Brooklyn had her first open heart surgery at Nationwide Children’s Hospital. The surgery, performed by Dr. Patrick McConnell, went perfectly. But when Brooklyn was brought from the operating room to the Cardiac Intensive Care Unit, she began to go into cardiac arrest. Her clinical team had to administer life-saving compressions on her little body, but tough Brooklyn pulled through.

“Ever since that day, she’s been a fighter,” says Victoria, Brooklyn’s mom. “Throughout our time, we have learned that life is precious and never to take anything for granted. Brooklyn is a blessing to our family.”

Brooklyn only continues to persevere and overcome her challenges. Now, at age six, Brooklyn has undergone two open heart surgeries, experienced a collapsed lung that left her on a ventilator for seven weeks, had a tube placed in her left lung to drain fluid build-up, as well as countless other procedures, echocardiograms and scans.

Today, Brooklyn is thriving in school. She’s made many friends and her teachers and therapists adore her. Brooklyn loves to do crafts, listen to music, swim and play outside on the playground. She has two older sisters and a brother who love spending time with her.

Brooklyn responds to the excitement of those around her. That’s what she hopes participants will bring to the Meaningful Miles Challenge, so she can reciprocate the positivity and exuberance of those involved and inspire them to have a good attitude about life and to keep smiling!