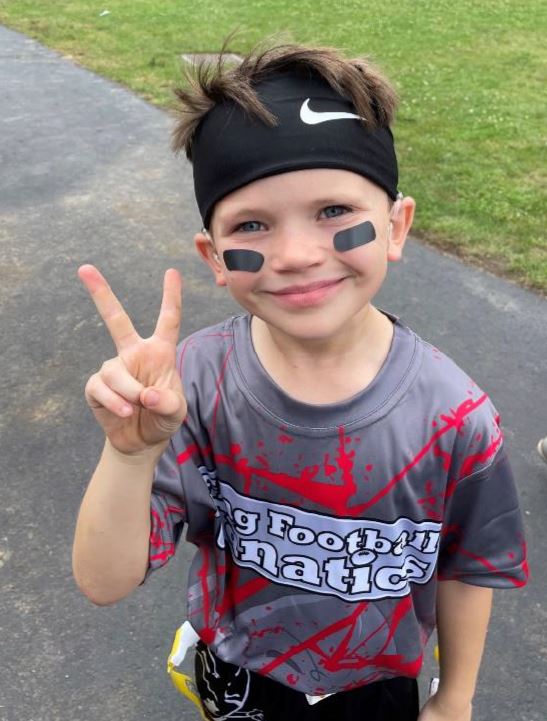 When Logan was born, his parents were told  that he “referred” on his newborn hearing screening. Almost immediately, his family took a path that they never anticipated.

At just 6 weeks old, Logan had his first appointment with Audiology who was able to definitively tell his parents that Logan had bilateral profound sensorineural hearing loss. He was totally deaf. A few weeks later, they met with the Hearing Program team. The multi-disciplinary nature of the team was powerful – Logan's family immediately felt intensely supported. The team (ENT, Audiology, Speech Therapy, Social Work) asnwered questions and scheduled Logan's  appointment to get his first hearing aids.

As time passed, it became clear that Logan wasn’t benefitting from hearing aids and together with the team his parents explored cochlear implants. On October 24, 2014, at age 10 months old, Logan got his “ears” and heard his mother's voice for the very first time!

Just prior to receiving his cochlear implants, Logan had some blood work done that showed that his blood counts were irregular and his platelet counts were unusually low. He was immediately seen by a Hematologist at the Hematology/Oncology outpatient clinic. Logan’s bloodwork remained a mystery.  Many blood tests showed that he could not hold a normal platelet count. Logan's hematology team at Nationwide Children’s was incredibly detail oriented and diligent.  After a consultation with the Hematology Genetics counselor who brilliantly collaborated with Logan's Hematologist Dr. Rose, Logan was diagnosed with RUNX1-Famililial Platelet disorder. Logan has a de novo mutation in the RUNX1 gene. This mutation causes a low platelet count and the platelets Logan does have do not function properly. Importantly, RUNX1-FPD also significantly increases Logan’s risk of developing blood cancer at some point in his life.

This diagnosis provides his family with powerful knowledge. Knowing of Logan’s risk, they can routinely monitor him for blood cancer, so that if he unfortunately develops this condition, it will be caught at treated extremely early. Nationwide Children’s Hospital has been a pioneer in genetics work and his family is forever grateful that they ensure that Logan has the best and most thoughtful care.

"Nationwide Children’s Hospital has become a central part of our story. We often take for granted that we have one of the nation’s best Children’s Hospitals right in our back yard. Logan’s day to day life would be extremely different but for the amazing physicians at therapists at NCH.When I think of NCH and all that I am grateful for, I am most grateful for the smaller things. Each clinician or employee we met at NCH treated us like family. There is a culture of kindness, patience and innovation that cannot be replicated – and that to me, is the magic of NCH." said Logan's mom.

By entering this year’s Columbus Duck Race, you are helping kiddos like Logan by supporting pediatric research at Nationwide Children’s. Every duck purchased truly makes a difference!