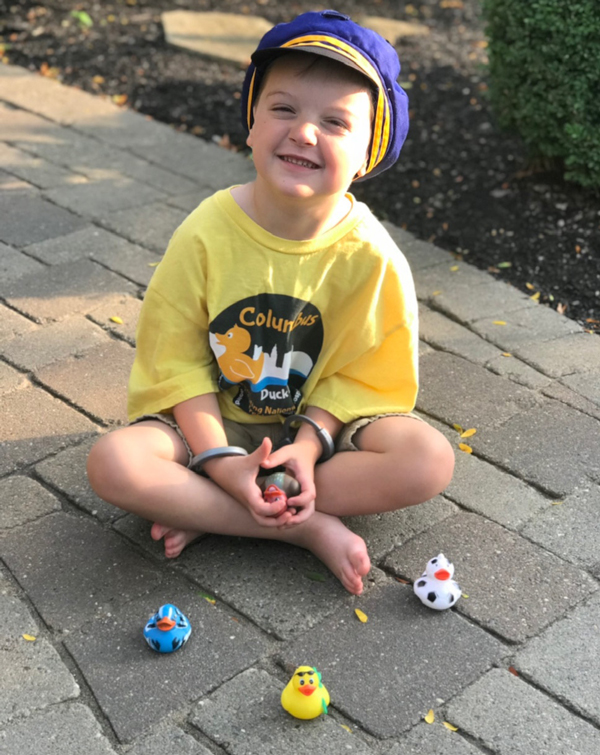 On April 23, 2018, 11-month-old, Luke, had a rare reaction to bacterial and viral infections that led to pneumonia and he was diagnosed with acute respiratory failure. When a person has acute respiratory failure, the usual exchange between oxygen and carbon dioxide in the lungs does not occur. As a result, enough oxygen cannot reach the heart, brain, or the rest of the body. When Luke ended up at Nationwide Children’s Hospital, he was septic and needed emergency surgery to remove fluid from his lungs. The next time his parents, Casteel and Mark, saw him, he was on a ventilator.

The next days were long and hard, and full of unknowns. His parents asked questions, listened to his medical team strategically think through Luke’s care during rounds, watched his nurses draw blood or wipe his face with such care—all of which allowed them to focus on their one job: holding Luke’s hand. “The staff that cared for Luke remained dedicated to providing the best care. They not only cared for Luke, but also for us. They celebrated the big and small victories with us and gave us the space we needed to process the hard,” stated Casteel.

While on a ventilator, Luke developed a clot in his femoral artery that cut off circulation to his right foot and caused severe nerve and muscle damage and ultimately an equinus deformity. Equinus is a condition in which the upward bending motion of the ankle joint is limited. After leaving the hospital, it took many visits before there was a plan set in motion to address Luke’s foot. His foot now permanently pointed down. One (non-NCH) doctor suggested amputation. Then Casteel and Mark discovered Dr. Whitaker at Nationwide Children’s Hospital.

“The doctors and nurses at Nationwide Children's Hospital’s PICU saved our son's life. When we thought he might not walk again without some sort of assistance, his orthopedic surgeon and physical therapist helped him learn to run and jump. We are so thankful for the committed, brilliant, and kind medical team that carried us through the most difficult experience of our lives. It is easy to take for granted having a top children’s hospital in our backyard – until you need it. I thank God every day that Nationwide Children’s Hospital was just a short (albeit scary) ambulance ride away,” said Casteel.

After months of serial casting, surgery, then months of physical therapy, Luke re-learned to walk, run, then jump. Luke continues to wear a brace at night and to see his orthopedic surgeon and physical therapist. They continue to work on increasing his strength, balance, and range of motion, but most people who see Luke and don’t know his story would never notice a thing. Luke is now an energetic and loving 4-year-old that loves superheroes, dinosaurs, and Ohio State football!

By entering this year’s Columbus Duck Race, you are helping kiddos like Luke by supporting pediatric research at Nationwide Children’s. Every duck purchased truly makes a difference!