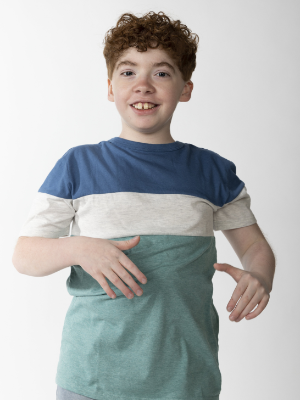 Auron was born a healthy, full-term baby boy with bouncy red curls and a bright smile. Three months later, everything changed. Auron struggled with breastfeeding, showed signs of diminished muscle tone, and missed vital developmental milestones. Auron’s then pediatrician referred him to Nationwide Children’s Hospital’s Neurology Clinic. Genetic tests revealed Coffin-Siris syndrome (CSS), a disease so rare that he is one in 400 people worldwide living with the condition.

CSS impacts varying degrees of developmental stages and multiple physical systems. The Neurology Clinic at Nationwide Children’s Hospital helped Auron’s Mom, Katie, understand her son’s diagnosis. Nurses trained and educated her on how to give Auron treatments at home to keep him healthy.

“As the mother to this very special boy, I am beyond grateful to live in a community with Nationwide Children’s Hospital. I personally believe my son has the best team who truly care about him and his health.”

Although completely non-verbal, Auron is a social butterfly. He loves to play baseball in the summer, build Legos and meet new friends. Nationwide Children’s continues to support Auron to help him live his best life.

Auron doesn't let his diagnosis stop him. And he doesn’t want anything stop the participants who pass through his mile either.