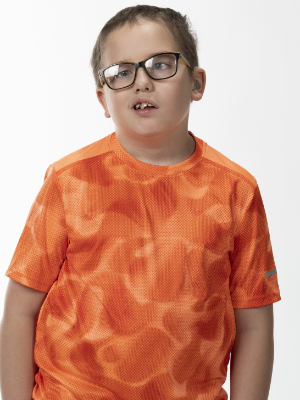 In March of 2019, Atreyu was diagnosed with medulloblastoma, a tumor that arises in the cerebellum, a part of the brain at the base of the skull. The cerebellum controls balance and coordinated movements. He was six years old at the time of his diagnosis.

Atreyu had been vomiting for months on end and complaining of headaches. He was taken to see multiple specialists to try and understand why he was frequently ill. His tumor was only discovered after he was taken to see an eye doctor through Nationwide Children’s Hospital. When the eye doctor dilated his eyes, it revealed an extensive amount of pressure on his left eye. The doctor immediately sent Atreyu to Nationwide Children’s Emergency Department for a CT scan. The scan revealed a small orange-sized tumor behind his left eye. Had they waited much longer, his pupil would have erupted.

The day after his diagnosis, he had brain surgery and the surgeon was able to remove the tumor in its entirety. Atreyu went on to complete six rounds of chemotherapy. Because of the location of his tumor, he was unable to speak, eat, walk, and do basic daily functions. He had to undergo extreme physical and occupational therapy to get back to his baseline. “When I first found out about Atreyu’s tumor, everything around me stopped,” said Atreyu’s mom, Courtney.  “I looked to my left and Atreyu was laying there smiling, laughing, and playing a game on his phone completely unaware of what was going on.”

Today, he can run and is walking by himself without assistance. A happy and carefree kid, he has routine MRI’s every six months and enjoys playing video games, building with Lego sets, and anything related to animals.

Atreyu will be touching the hearts of all of the participants who pass through his mile.