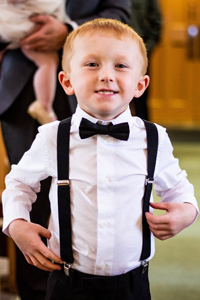 Within a few hours of being born, Anderson was transported immediately to Nationwide Children’s Hospital NICU. Two days later, little Anderson had his first open-heart surgery.

His mother Shannon was 17 weeks along when her unborn son was diagnosed with Hypoplastic Right Heart Syndrome (HRHS), a rare congenital heart defect where the right-side structures of the heart are underdeveloped or not formed at all.

Anderson recovered in Nationwide Children’s for five weeks after his Blalock-Taussig (BT) Shunt surgery and was in and out of the hospital for the next few months due to feeding complications. In an effort to help Anderson gain weight for his next major surgery, he was fed through a tube for several months.

At 5 months old, Anderson underwent his second heart surgery: The Bi-Directional Glenn, which removed the first shunt and rerouted the blood from the upper half of his body to go directly to the lungs for oxygen. A few months later, Anderson was still unable to eat and had a g-tube placed.

A few years later, Anderson had his third open-heart surgery, the Fontan Completion. In his short three years of life, Anderson had already endured many surgeries and procedures and most likely had more in his future.

Anderson was selected as the first patient to be the recipient of the groundbreaking Tissue-Engineered Vascular graft clinical trial at Nationwide Children’s Hospital.

Nationwide Children’s Hospital is home to the first FDA-approved U.S. human trial to investigate the safety and effectiveness of using tissue engineering to repair congenital heart defects. Tissue Engineering Program leaders, Dr. Christopher Breuer and Dr. Toshiharu Shinoka, were the first pediatric surgeons in the world to engineer blood vessels made by a child’s own cells and implant them in human infants to repair of congenital heart defects.

Anderson’s vascular graft will continue to grow with him and prevent any additional major surgeries in his future. It’s revolutionary work that aims to change the future of pediatric surgery and save lives. And it’s all happening at Nationwide Children’s.

“Anderson's participation in the TEVG clinical trial will help the outcomes of heart patients for generations to come,” says Chris, Anderson’s Dad. “This will allow our heart heroes to live active, healthy, productive lives.”

Despite his many setbacks, Anderson is now a thriving 9-year-old who has a deep love for animals and continues to amaze his family with his progress. Keep an eye out for Anderson on race day where you will find him sharing his smiles with all the runners and walkers of the Nationwide Children’s Hospital Columbus Marathon & ½ Marathon.