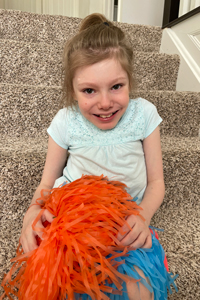 Addyson was diagnosed with a rare condition called Kozlowski Type Spondylometaphyseal Dysplasia; a bone disease characterized by short stature involving the trunk. This caused her to have severe scoliosis with kyphosis that causes her to bend forward. In 2018, Addyson suffered a rare complication after a halo traction surgery and VEPTR, a curved metal rod that is designed to help children with severe chest deformities breathe. During surgery, she obtained a spinal cord injury and lost complete function of her right leg.

Addyson must undergo many surgeries to correct her condition. She currently has a MAGEC rod that has to be magnetically extended every few months. This past December, Addyson had a successful Veptr surgery. Since then, her scoliosis has improved greatly. Going forward, she will need surgery every four months to extend the rods in her back until she reaches full growth.

“Addyson’s mother Stephanie, says, “Nationwide Children’s is a place that we can take our daughter to and know that she is in the best possible place to receive medical care. It is a place where myself, my husband, my daughter, and family have formed a relationship with and a place where my daughter sees familiar faces to calm her nerves and ours.”

Addyson is currently 9 years old and doing great! She is dancing and singing to her favorite musician, Jojo Siwa. Her favorite sport is swimming, and when she grows up, she wants to be a zookeeper.

Addyson will inspire runners and walkers who pass through his mile during the Nationwide Children’s Hospital Columbus Marathon & ½ Marathon to know that they can overcome their challenges and be champions too!