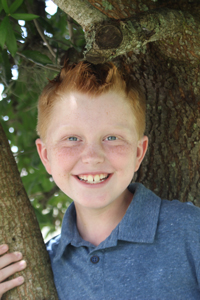 When Blaine was born, he failed the newborn infant hearing screening.  His parents were told it was likely due to fluid and not to worry.  However, at 6 months of age they received the news that their son, Blaine, was completely deaf in both ears. Blaine was routed to Nationwide Children's Hospital to begin the cochlear implant process. The cochlear implant is a complex electronic device that can help to provide a sense of sound to a person who is profoundly deaf or severely hard-of-hearing. Blaine had cochlea abnormalities that would make the implantation process difficult and they were unsure how well he would ever speak. The genetic source of his hearing loss was found post-surgery. It was then when he was diagnosed with X-Linked hearing loss. This type of hearing loss is usually not considered for cochlear implants.

After a successful surgery, Blaine acquired listening and spoken language skills at an incredibly rapid pace. He excelled in vocabulary and listening.  Blaine's surgeon, Dr. Edward Dodson, even published a study on Blaine's success to encourage other patients with X-Linked deafness.

Blaine quickly caught up to his hearing peers in his test scores and even began reading at age 2 1/2!  As amazing as this was, this was one of the first of many red flags that would precede to Blaine's autism diagnosis.  As he acquired more language, his parents noticed things seemed "off" with his behavior. While this may seem like another developmental hurdle, his parents, Chris and Kendra, knew that his high-functioning autism likely helped him overcome his deafness. His memorization skills and obsession with detail allowed him to acquire language and build vocabulary fast enough to close the gap he was facing.

“As a new parent enduring a very difficult period of confusion, anger and overwhelming options, our team at NCH always made us feel supported, encouraged and hopeful. It was the relationships we formed with our team that truly enabled my son to be as successful as he was/is,” said Kendra.

Blaine is a child who can find joy in the smallest, simplest things! Blaine loves entertaining and performing for others. He is an exceptional student who ended third grade on the honor roll, has been “Student of the Month” and won a Principal’s Award for “Wisdom.” His best friend is his dog Lilo.

Blaine will be cheering on the participants of the Nationwide Children’s Hospital Columbus Marathon and ½ Marathon who come through his mile – he will be giving them inspiration and motivation to keep going, even when things get tough.