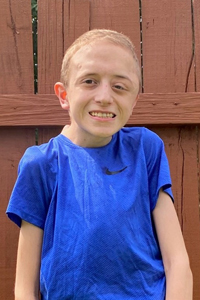 As an infant, Matthew was diagnosed with neurofibromatosis. At 8 months of age, he had his first craniotomy to begin repairing his rapidly growing, sphenoid bone, which supports the nerve and brain structures. Following that he had to undergo eight additional surgeries. A follow up MRI in September 2015 revealed an incidental find: a tumor in the front of his corpus callosum that needed prompt surgery. The cancerous tumor had grown back and had to be removed. During the time of Matthew’s growth spurt, he was diagnosed with scoliosis. He had to undergo a surgery to insert growing rods. Growing rods help children who are still growing and have not reached skeletal maturity. Growing rod implant surgery is often the recommended treatment to correct the spinal curve and allow continued growth of the spine. Matthew still has routine monitoring every 3-6 months as it could grow back or as he enters puberty could grow a potentially fatal tumor anywhere there’s a nerve ending.

Matthew has spent the past two summers in the hospital on the 7th floor in halo traction for his spine. His back has undergone two big spinal correction fusion surgeries and one revision. Through the pain, Matthew has remained strong and resilient. “The staff has worked with Matt, entertaining him regularly with games, tricks, pranks and fun things to do. They know all the tricks of milkshakes, best snacks and what to get to change up and “create” your own dinner from the menus! We couldn’t have gotten this far without Nationwide Children’s Hospital and God given talented staff,” says Matthews’s mom, Mindy.

Matthew, now 18 years old, was granted a wish to see his favorite bridge- the Golden Gate Bridge! He was able to help the GGB’s master locksmith change a high security lock!! He now has his name on a plaque that he was able to place on a piece of the bridge!

Matthew is happy to be a patient champion for the Nationwide Children’s Hospital Columbus Marathon & ½ Marathon and to do something for the hospital that has helped him so much.