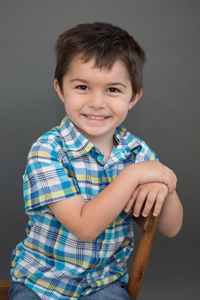 Gianni’s journey at Nationwide Children’s Hospital began in 2017 when he was referred to Gastroenterology (GI) for chronic constipation. After eight months, he was sent to another specialist within GI and was put on the path to a diagnosis. After evaluating Gianni, his physician submitted a therapy referral.

Gianni’s family learned that he had low muscle tone, an abnormal gait and gross motor delay. He began physical therapy and was referred to the Neuromuscular and Physical Medicine and Rehabilitation Clinic. An electromyography and nerve conduction test showed abnormal results and a genetic blood test was ordered. Gianni was diagnosed with Spinal Muscular Atrophy (SMA) two days after his third birthday.

Although he has met all milestones on time, Gianni has always had trouble with stairs. He falls frequently and has a hard time walking long distances. He wears SMO’s (ankle braces) to give him stability and assistance. Gianni continues to receive treatment at Nationwide Children’s and works hard in therapy every week.

When asked what Nationwide Children’s Hospital means to Gianni’s family, his mother, Natalie, says, “Nationwide Children’s means everything to our family! Our baby boy’s diagnosis was the darkest and scariest time in our lives. We were devastated, heartbroken and terrified of what the future would look like for our sweet boy. Our team within the SMA Clinic and amazing physical therapist carried us through the weeks and months following diagnosis. This world-renowned hospital and neuromuscular clinic, along with the Abigail Wexner Research Institute and doctors and researchers who have dedicated their lives to curing neuromuscular diseases, give us so much hope. Words really can’t describe what that truly means to us. We feel so blessed to live in Columbus and have Nationwide Children’s as our medical home.”

Gianni loves superheroes and cars! Hockey is his favorite sport, especially the Columbus Blue Jackets and The Mighty Ducks. His big brother, Vito is his best buddy. He loves playing with his brother and cousins. He is a fan of all things Disney and it is his favorite place in the world!

As you participate in the Nationwide Children’s Hospital Columbus Marathon and ½ Marathon this year, remember everything that Gianni has overcome as motivation to keep going!