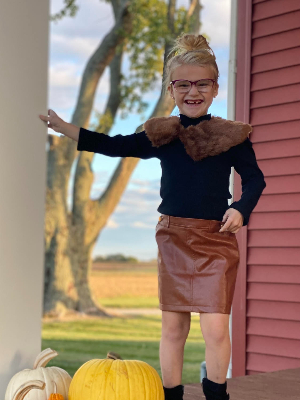 Let my story SERVE as an inspiration to ALL!

Thank you for visiting my Children's Champion page.

Hello my name is Brielle Anderson and I am 7 years old, when I was born in 2013, is when researchers found the deletion of the 16th chromosome called GRIN2A. I wasn't diagnosed with GRIN2A until October 26th, 2016 by my neurologist Dr. Emily De Los Reyes. Since the moment I was born I have been in and out of the hospital numerous times. My first visit to Nationwide Children's Hospital in Columbus, Ohio began when I was three weeks old when I was admitted into the hospital for high fever of 102.5 at this time, I was tested for everything however a reason could not be found. After spending three days in the hospital, I was sent home without a diagnosis or reason for the fever. This would be the first of many visits throughout my life. I was either at Nationwide Children’s or the pediatrician's office for a cough that was deep and that always led to bronchitis and or pneumonia. My family staying on top of breathing treatments kept me alive and going. Eczema lined my body from head to toe, that you could literally peel my skin off like a snakeskin, I battled double ear infection for 7 weeks straight and all which lead to failure to thrive. After crossing off everything on the list at 4 months old, I was sent to Children's for ear tube surgery for my ears. My parents noticed that I was still getting sick all of the time and still wasn’t meeting developmental milestones and at 18 months I was seen by Dr. Lisa Marie Ulrich, a pulmonary doctor to evaluate my lungs, it was during this 3 hour procedure that my pulmonary, ear, nose, throat (ENT) and a GI doctor would run me through several tests, they had concluded that I was aspirating liquids into my lungs and they also found I had partially collapsed airways, and a cleft/slit in my vocal cords. From this, my doctors decided to thicken my liquids and surgically repair the vocal cleft to try to stop the aspiration. I was also having issues with choking on liquids and foods. I began services through Help Me Grow, Early Intervention, and OT, Speech, and PT through Nationwide as well. I finally took my first steps when I was 2 years old. After still struggling to meet milestones and continually being admitted due to my weakened immune system, we were sent to the neurology department for genetic testing, where I was diagnosed with GRIN2A. At the time of diagnosis, I was told there were less than 200 patients in the world. I also found out that my parents weren't carriers, which meant there was a less than 1% chance they could have had an amazing rock star child like me. Through my specific code variant of GRIN2A, I am one of three in the world. There is not a lot of information on GRIN2A, which is why we want to raise more funds for research, but what we do know is epilepsy and communication, as well as developmental and some academic delays, occur. I verbally speak about 35 words, use an AAC Device as well as American Sign Language to communicate.I have learned a smile and a kind please can get me a lot in life too:) We are also aware that regression can happen as well. For example I may wake up tomorrow and not be able to walk. There are some days when my balance is very good and other days when I may fall a lot. In November 2018, my first seizure appeared on a 24-hour EEG and I began my battle with epilepsy. My mother as well as my family have had to provide me with seizure rescue meds on numerous occasions and I have been known sometimes to have up to 12 seizures in a day and sometimes my sleep cycle can be off. During this same time, I was diagnosed with asthma as well as my vision was tested for farsightedness and a tonsillectomy helped keep me a little healthier. My journey is unknown, but I do know that God chose my mom, dad and my mother hen, younger sister Reese as well as myself to serve others in the best way we can through it all.

In September of 2019, my mother attended the very first GRIN conference in Atlanta and we believe this is only the beginning of not only helping me but providing HOPE to so many other warriors with GRIN1, GRIN2A, GRIN2B, and GRIN2D.

We would love to give a special shout out to Brielle’s amazing team of doctors, therapists, educators, aides, her family and the village of amazing friends that haven’t left our sides. It truly takes a village and we are blessed with the best!

Thank you Dr. Lisa Marie Ulrich, Dr. Jonathan Grischkan, and Dr. Emily De Los Reyes as well as so many others in the medical field!

Please consider supporting the most meaningful marathon in the country by making a donation today.