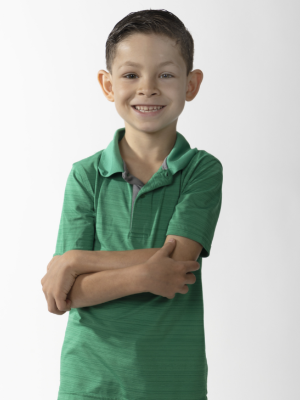 Eight-month-old Cameron (Cam) was rightfully fussy after a day of teething. His mom, Kelli noticed he was unusually warm and became concerned when his temperature rose later that evening. The next morning, Cam’s parents took him to a local Emergency Department when his arm began “jerking.” The ED staff called for immediate transport to Nationwide Children’s Hospital. Doctors ordered blood work and a CT scan due to the one-sided presentation of the seizures. The CT scan showed an unknown spot on Cam’s brain and the blood work caused doctors to lean towards a possible infection. He was admitted to the hospital and scheduled for an MRI the next day. That scan revealed that it was not an infection, but an unknown mass in his brain.

“I really could not believe what I was hearing. We were in the hospital until the end of that week just getting whatever initial virus that was causing his fever under control,” Kelli says.

The Dilvers were sent home along with seizure medication and a list of precautions to look for. They returned the next month for Cam’s follow-up MRI. There had been no changes to the size or shape of the mass. Chief of Neurosurgery, Dr. Jeffrey Leonard presented two options: remove it or monitor it and keep Cam on the seizure medication for as long as the mass remained. They chose to monitor it until Cam’s six-month follow-up visit. Several MRIs later, Cam’s mass had not changed. Kelli decided to have the mass removed from Cam’s brain to give him the best quality of life possible with no seizure medication or MRIs twice a year.

The surgery was successful, and Cam healed quickly. He is now an energetic eight-year-old boy, able to fully embrace childhood.

“Nationwide Children’s has played such an important role in his care,” says Kelli. “Dr. Leonard and the Neurosurgery department will always hold a special place in our hearts for the care that they provided.”

Cameron’s infectious happiness will undoubtedly energize the participants as they pass through his mile.