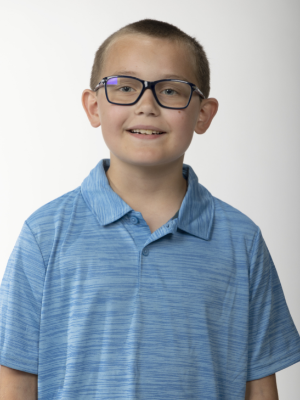 Nine-year-old Landon is no ordinary kid. When he’s not reading everything he can about frogs, or catching them with his dad, he loves to play soccer and basketball, and practice tae-kwon-do. Trying to keep up with this active kid, you would never know that he’s under the treatment of several Nationwide Children's Hospital specialists.

When Landon was three, he came home from daycare with a noticeable limp, and the next morning, he couldn’t put any weight on his leg. After x-rays showed there were no fractures, he was referred to an orthopedic surgeon who narrowed it down to one of two conditions: Legg-Calve-Perthes disease, or multiple hip dysplasia. Dr. Kevin Klingele, chief of Nationwide Children's Orthopedics, continues to monitor Landon’s development and hopes to know which condition is affecting him soon.

Landon also suffered from random bouts of intense vomiting, and feelings that something was stuck in his throat, despite there not being anything there. As the feelings got worse and more prevalent, Landon was sent to another Nationwide Children's specialist, Dr. Colleen Flahive. Dr.Flahive diagnosed him with Eosinophilic Esophagitis (EoE), achronic, allergic inflammatory disease of the esophagus. Though there is currently not a cure for EoE, Landon is undergoing targeted treatment.

Landon has a deep understanding of his body and knows when something is "wrong.” Discussing the need for multiple procedures and having to now take daily medications ,multiple times a day, really scared him a lot. Landon’s parents, Andy and Shana appreciate the care he’s received at Nationwide Children's. “We are so incredibly grateful for Gastroenterologist, Dr. Colleen Flahive, Allergist-Immunologist Dr. Elizabeth Erwin, and the rest of the care teams at Nationwide Children's, as they are incredibly patient with him (and us) and are always able to explain things in a way that Landon can understand.” He is excited about cheering on the participants who come through his mile.