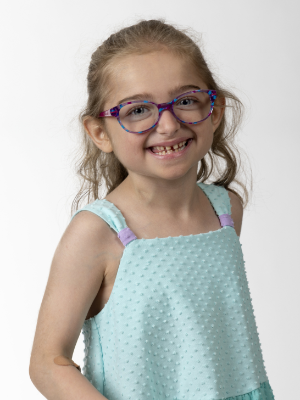 Annika was born a full-term, healthy baby in February 2015. At just a few months old, she developed a severe adenovirus infection which led to respiratory and multisystem organ failure requiring desperate life-saving measures. As a result of the infection, Annika required extensive ongoing medical care and was eventually transferred to Nationwide Children's Hospital for ongoing medical treatment.

After things seemingly were moving in the right direction, Annika’s parents learned she had developed bronchiolitis obliterans, a serious lung condition which ultimately led to a lung transplant evaluation. She was listed inactive for a double lung transplant. Her family started working with the cardiopulmonary rehab team to develop a home exercise routine to keep Annika as strong as possible leading up to surgery. Annika faced additional challenges and was seen by the Intensive Comprehensive Feeding Program.

In March of 2021, it became apparent that Annika's lungs were beginning to impact her quality of life. After several hospitalizations and infections, Annika was listed active for transplant. On September 16, 2021, her parents received the phone call that changed their lives. Annika officially received her double lung transplant on Sept17, 2021.

“We could not be more grateful for the entire transplant team. Everyone works together with Annika's best interest at heart. The entire team is so compassionate,” says Annika’s mom, Kourtney. “We are so excited to continue to work with the team as well as cardiopulmonary rehab to give Annika the chance to use her new lungs and be a kid!”