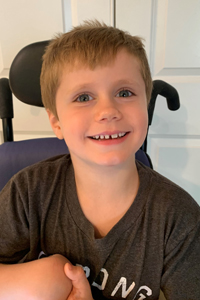 Simon was born in 2013 and thought perfectly healthy. The first weeks led to serious concern, as he was not eating, losing weight, and sleeping nearly 20 hours a day. At four weeks old, Simon was admitted for Failure to Thrive and subsequently transferred to Nationwide Children’s Hospital. The first year of his life was fraught with feeding difficulties, multiple hospitalizations, and placement of a feeding tube.

Simon is now eight years old and is thriving – both in growth and cognition. He is reading, writing, learning and even talking – both with his Talker and his mouth. He continues to receive many therapies and is supported with a 1:1 aide. Simon went through Intensive Feeding programs three times and is now able to eat and drink by mouth; he was able to have his feeding tube removed right before Christmas 2020.

Simon is a force of nature – his sunny smile and joyful approach to life is unmatched. He loves playing with his older brother, Archer and his service dog, Hardie. The exceptional thing about Simon is that he is not defined by his diagnosis. He is defined by his beautiful spirit, his zest for life and a smile that can light up a room. Simon loves to run and jump and be active. He loves to golf, swim, and find fun ways to keep his body in motion. He is also a whiz on the iPad. Simon’s life has been a journey. He even has his own hashtag of #growsimongrow, and Simon’s journey is far from over.

When you ask Simon’s mother, Julie, what Nationwide Children’s Hospital means to her, she says, “I can sum it in one word, hope. Nationwide Children’s means hope. It’s synonymous with doctors, nurses, therapists, aides, volunteers, trainers, and Child Life people who care. We have spent thousands of hours, hundreds of days at Nationwide Children’s. We've cried, we've rejoiced, we've been educated. We've felt fear, indescribable worry, encouraged and hopeful. And even on our darkest day, there is someone at NCH to offer hope.”

Simon is an energetic, remarkable little boy who brings forth so much joy, who views life as a gift. His immense personality and smile make him universally adored by the people he encounters. We know Simon’s contagious energy will inspire everyone who participates in Nationwide Children’s Hospital Columbus Marathon and ½ Marathon!