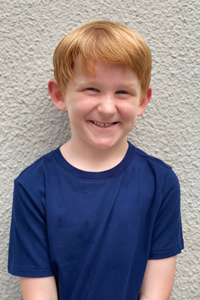 In April 2018, when Augie woke up in the middle of the night with an upset stomach, his parents never imagined it was being caused by a brain tumor.

Within 20 minutes of their arrival at Nationwide Children’s Hospital, Augie’s physicians had given his family the shocking news. The tumor was sizable, and it was blocking the release of spinal fluid and compressing his brain. It was making him so nauseous that he was vomiting bile in the middle of the night, but his three-year-old self could not quite communicate that.

His parents were terrified, confused, and frustrated. However, they were quickly met with an action plan — within days, one of the country's top surgeons would remove the tumor.

The surgery was successful, and Augie was well on his way toward healing, but again there was an abrupt challenge. A major infection in the brain resulted in the need for another surgery and a months-long fight against hearty bacteria.

Heading into the Fall, the infection had been treated, Augie’s scars were healing, and life was beginning to return to normal. Yet, somehow, a molecule of the tumor remained hidden in his brain, growing to a size that made it again evident one year later. A third brain surgery was necessary, and while incredibly frustrating for everyone, especially Augie, they were met with the support and talent of the Neurosurgery team they had gotten to know so well. Today Augie is tumor-free, happy, healthy, and bears a hard-earned scar under his red locks that tells his story.

Augie’s mother, Kelly, says, “Our experience inside the Nationwide Children’s Hospital walls gave us a deeper appreciation than we ever thought possible. To us, Nationwide Children’s does not just serve the community. It serves communities everywhere. We were able to see first-hand that it is saving, changing, and shaping lives everywhere. To us, it was a calming presence at a time of great distress. A reassurance that we were doing everything possible. In addition, a network of support when we needed it most.”

If you ask Augie who his hero is, he’ll gladly tell you about Sam Short, another NCH neuro patient also battling tumors. He dedicates his role in this year’s marathon to Sam. You can do hard things Sam!

As you complete the Nationwide Children’s Hospital Columbus Marathon and ½ Marathon, remember that Augie and his family are cheering you on every step of the way.