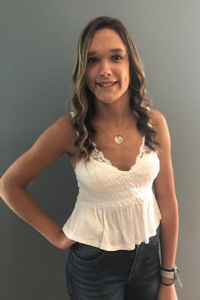 Taylor was born premature with a bowel obstruction, which is an obstruction in the small or large intestine, causing difficulty in passing digested material normally through the bowel. She was transferred to Nationwide Children’s Hospital where she underwent two neonatal surgeries and spent three months in the Nationwide Children’s Hospital’s Neonatal Intensive Care Unit.

When Taylor was 15 years old, she began to show signs of what again would be a bowel obstruction, but this the time it was caused by a very large unidentifiable mass.

Taylor went back to Nationwide Children’s Hospital where her Gynecologist, Dr. Geri Hewitt, found a very large ovarian cyst. Her physicians scheduled surgery to remove the paratubal cyst and discovered that it weighed 19.2 pounds! The mass was wrapped in her bowels and around her uterus.

After her surgery, Taylor had what her physicians called a “sleepy bowel” which caused her to stay another month inpatient at Nationwide Children's while they waited for her bowel to wake up and start moving again on their own. Taylor’s mother, Heather, says, “The staff at NCH made it easier to be away from home for so long because of how wonderful and friendly everyone was. Everyone was always going out of their way to see if we needed anything.”

After the cyst had been removed, Taylor’s gastrointestinal pains began to decrease. She started feeling better and began to enjoy life again! Heather says, “Nationwide Children’s Hospital is everything to me! They have saved my daughter’s life more than once and for that I owe them the world! I can never thank them enough for everything they have done for me. They gave me back my little girl. Everyone at Nationwide Children’s Hospital are truly angels and I am forever grateful!”

Taylor is a shy, loving, big hearted 17-year-old that loves shopping, playing softball and hanging out with her friends and family. Taylor’s determination and power to overcome obstacles will motivate everyone participating in the Nationwide Children’s Hospital Columbus Marathon & ½ Marathon to keep going!