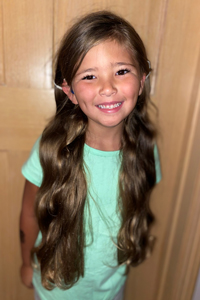 Adrianna was unexpectedly diagnosed with Cytomegalovirus (CMV) and hip dysplasia at three days old. Due to her hip dysplasia, she was required to wear a Pavlik harness to keep her hips aligned in their joints until six months of age. At six months old, Adrianna underwent a hip surgery that required her to be in a full body cast for three months, and a body brace for the following six months.

Adrianna’s CMV affected her brain, spleen, liver, platelets, and hearing. The part of her brain that was affected is the area in which cerebral palsy develops. Her spleen and liver were enlarged. Her platelet levels were extremely low. And the biggest impact, she was diagnosed as bilateral sensorineural hearing loss. Adrianna received her hearing aids when she was four months and did exceptionally well until she turned about two and a half. She recently went under unilateral cochlear implant surgery and it changed everything for the better. Adrianna is now five years old and full of energy and life. Nothing can stop her from running all over the place and talking to everyone she meets. She has never allowed her special needs to stop her from succeeding.

Adrianna’s mother, Samantha, says, “Nationwide Children's Hospital means more to me and my family than I'm sure I could ever put in words. The immense support we receive from all departments involved is positively overwhelming. From the comfort in every tough situation we have faced, to the passion and excitement they have for my daughter hitting her milestones. I truly feel as though her doctors are not just rooting for her but are on our team. Nationwide Children's and all its staff have truly been one of our biggest blessings. I could not be more thankful and grateful for them.”

Adrianna loves to blow bubbles, color, sing songs and socialize. As you participate in Nationwide Children’s Hospital Columbus Marathon and ½ Marathon in 2021, we know Adrianna’s smile and positive outlook on life will provide you with the motivation to keep going.