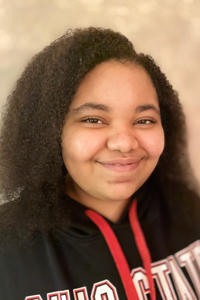 Savannah was just ten years old when she began taking college classes through Columbus State Community College. Little did she know, her desire to learn and challenge herself would lead to discovering a diagnosis she did not see coming.

Savannah had always been very active with dance and basketball. She was a five-year dancer at one of the top performing arts academies’ in Ohio. When Savannah began taking college courses, she stopped dance and basketball to focus on her studies. This allowed her rate of weight gain to increase rapidly.

Savannah and her family knew something wasn’t right. They were referred to the Endocrinology team at Nationwide Children’s Hospital where the doctors took time to hear her concerns and ran the proper tests to diagnose her condition. Savannah had Cushing’s Disease, a serious condition of an excess of the steroid hormone cortisol in the blood level caused by a pituitary tumor secreting adrenocorticotropic hormone (ACTH). ACTH is a hormone produced by the normal pituitary gland. Savannah’s physicians quickly created a surgery plan and successfully removed a tumor from her pituitary gland in May 2019.  Savannah has been growing and losing weight ever since.

Recently, Savannah’s family was informed that the tumor is reoccurring. Her team of doctors have been following her closely since her surgery in May 2019. Savannah and her family are confident that her team will provide her with the best possible care to medically continue her fight.

“Nationwide Children’s is our second home. Having Dr. Mamilly take time to listen to our concerns and observations really made us feel heard for the first time. Dr. Drapeau and Dr. Walz walked us carefully through each step of the process from the surgical plan to follow up care. Savannah adores her team of doctors so very much,” says mom, Sam.

Savannah has a passion for dogs and aspirations to become an entrepreneur focused on canine care. As you complete the Nationwide Children’s Hospital Columbus Marathon and ½ Marathon this year, remember Savannah’s story as motivation and encouragement to never give up!