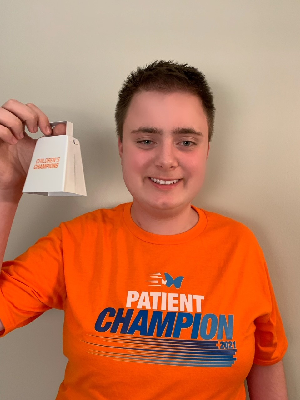 Neil was diagnosed with Mixed Phenotype Acute Leukemia on January 11, 2019 after being sick for several weeks with what was thought to be a stubborn virus that would not go away. This diagnosis—a rare type of leukemia—was devastating to Neil and his family.

When Neil learned his diagnosis, he was scared and surprised. He didn’t know what would happen next.

“I was shocked that something like this could happen to my healthy boy—a boy who had just played basketball and had been running around with friends days before,” says Kelly, Neil’s mom.

Neil’s father, Benton, remembers feeling despair and anxiety that this disease was threatening the most precious thing in their lives, but he had hope that Neil's strength and the best doctors and nurses would help him through this.

Throughout Neil’s treatment, he has remained positive, although he has faced several rare side effects, including kidney and GI complications, red man syndrome, and he inexplicably lost the ability to walk early on in his fight.

Neil is in maintenance now and he has started participating in “normal” activities again. He enjoys spending time with friends, playing video games and watching his favorite shows. Neil is an entertainer with a great sense of humor, laughing and joking with hospital staff every time he is admitted or when he must visit the emergency room.

Neil will be in treatment for more than two years, but he has worked hard to regain mobility and get healthy again, all while keeping his sense of humor. He loves telling stories and jokes to any audience and wants to help other kids going through the same thing or facing similar challenges.

Neil’s mom, Kelly, says, “We are so lucky to live near such a fantastic facility and skilled physicians. We know that Neil is receiving the best treatment and that everyone involved in his care works hard to resolve issues and keep him healthy.”

During the Nationwide Children’s Hospital Columbus Marathon and ½ Marathon, Neil will provide participants with the encouragement to keep a sense of humor when the going gets tough and to never give up.