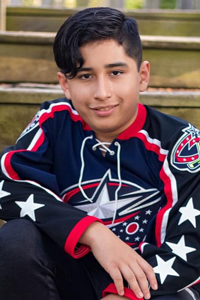 Andy was born via C-Section at 35 weeks. From the moment he was born, he had trouble eating and gaining weight. When Andy turned two, he was diagnosed with Gastroesophageal reflux disease (GERD).

After many years of fighting and encountering problems due to his oral aversion, his doctors decided on the implantation of a Gastrostomy button to help maintain his nutrition. In 2016, Andy was diagnosed with severe Gastroparesis, acondition that affects the stomach muscles and prevents proper stomach emptying, Gastroparesis can affect digestion.The medication prescribed did not alleviate his symptoms. He and his family began considering having his stomach surgically removed as a last resort.

His doctors decided to change his Gastrostomy tube to a Gastro-Jejunal tube, which then prevented him from eating by mouth. After this diagnosis, his local Gastroenterologistin Oklahoma referred him to Nationwide Children’s Hospital.

Andy and his family travelled from their home in Oklahoma to Columbus where they met with his new physicians and doctors. The team of doctors ran an assortment of tests and the results indicated that Andy was a candidate for the gastric pacemaker. Andy had the pacemaker implanted in March of 2018 and his life changed drastically for the better.

Nationwide Children’s Hospital is proud to treat children in 49 U.S. states and 54 foreign countries. Andy and his family have been traveling to Columbus almost monthly for regular checkups with his doctors.

“This hospital means hope and for us, and peace of mind that our son is under the best medical care. We are truly grateful for the medical team at Nationwide Children’s Hospital,” says Carolina, Andy’s mother.

Andy is a huge fan of the Columbus Blue Jackets and NASCAR! He also enjoys playing with his friends, reading books, and attending school. He loves to play video games and basketball. ​

Andy is travelling the distance to get the care he needs, and he knows that you can too during the Nationwide Children’s Hospital Columbus Marathon and ½ Marathon.