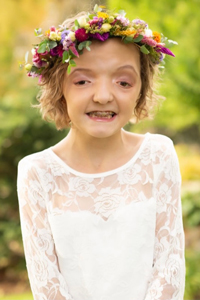 Nationwide Children’s Hospital has been a part of Raegan’s life since the day she was born. Raegan was born six weeks early. Raegan’s mother, Ashley, says, “Her birth was very scary. She wasn’t breathing and there were also some major abnormalities. We were told she had potential to be a very sick baby.”

Raegan was transferred to Nationwide Children's Hospital and as soon as she arrived, her family received answers. Raegan was born with a rare, genetic disorder called Apert Syndrome. Apert Syndrome is a craniofacial disorder in which the joints in a newborn baby’s skull close too early. The brain can’t grow from front to back, and patients with Apert Syndrome also tend to have fused fingers in their hands and in their feet.

The mission of the Division of Genetic and Genomic Medicine at Nationwide Children’s Hospital is to improve the lives of individuals with genetic conditions by delivering compassionate, family-centered care for genetic and genomic diagnostic services, providing advanced therapies, and supplying counseling, education and advocacy for every patient.

When Raegan’s father, Charles, heard her diagnosis for the first time, he said, “It was the most settling moment of our lives. We had answers.”

Early in infancy, Raegan underwent cranio-surgery to give her brain room to grow. As she grew up, she received multiple intensive surgeries to move her face forward. These surgeries would allow her to breathe better, give her better protection of her eyes, improve her bite, lift her eyelids up, and the ability to close her eyes.

Ashley says, “To us, Nationwide Children's Hospital means comfort. We take great comfort in knowing that the doctors have Raegan's best interest at heart. Knowing that she is in the hands of those that truly do care about her as if she was their own brings us an extraordinary amount of comfort.”

Those who pass through Raegan’s mile in 2021 on the Nationwide Children’s Hospital Columbus Marathon & ½ Marathon will gain a smile and a friend.