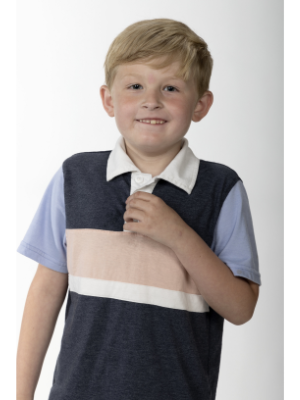 Connor’s Scoliosis diagnosis came on his 3rd birthday.  A nurse practitioner noticed his back looked different and encouraged his parents to get an X-ray the same day. The results came back with an “S” curve well over 65 degrees, which is in the range of Severe Scoliosis. Doctors advised they had two choices. They could either implant “growing rods” into his back, which involved complicated hardware he would need to get lengthened every two-three months and surgically replaced every two years, or Connor could utilize a new treatment technology called Mehta casting.

Orthopedic Surgeon, Dr. Walter Samora, at Nationwide Children’s Hospital had just started using Mehta casting. It is a non-invasive casting method that is applied under anesthesia to correct and control his large spinal curvature. The evidence was growing for this method and Connor’s parents wanted to try anything to avoid cutting into his skin. From 3 to 5½ years old, he had a Mehta cast on his body that went from just below his armpits to his hip bones. With the casting, he had many limitations, but those never slowed him down.

He transitioned to a less-restrictive torso brace in June of 2020. With this brace, he still faces challenges because he must wear it at least 16 hours a day. However, he now can take baths during brace breaks, participate in water play, and have some time to be “squishy” for hugs.

“We are forever grateful to Dr. Samora and the whole Nationwide Children’s team who oversaw his care as he underwent so many treatments for Scoliosis. We know that he will need surgery at some point in the future, but this technology has bought us precious time to delay surgical intervention if we can and contribute to his long-term health outcomes,” says Connor’s mom, Lindsey.

His interests include entering new levels on Super Mario Maker, playing Minecraft and Roblox with his brother and playing “tickle monster” with his dad. He is a sweet and thoughtful little boy who loves to snuggle on the couch.