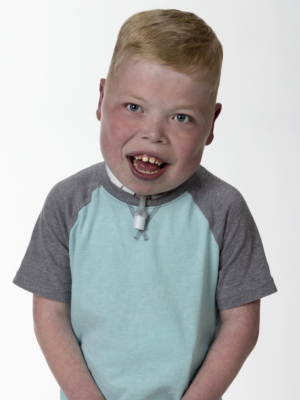 Four months before Cayden was due to be born, his parents were informed that his diaphragm was not developing properly. The diaphragm is a major muscle that the body uses to breathe. It separates the lower organs from the upper organs. When Cayden was born, his parents, Gretchen and Kevin, picked his name because it means “fighter.”

Within his first few hours of life, Cayden was diagnosed with congenital diaphragmatic hernia (CDH). When a child has CDH, there’s a hole in that layer or the diaphragm is missing altogether. When this happens, your lower organs can move up into your chest cavity, push on your lungs and prevent them from developing properly. Shortly thereafter, he was rushed to Nationwide Children’s Hospital where he was immediately placed on an ECMO machine.

Cayden fought every day that he spent at Nationwide Children’s. His parents often felt they would not be going home with Cayden, but with the help and support of many nurses and physicians, 839 days later, they took him home. “I know they saved his life at Nationwide Children’s Hospital,” says Gretchen. “I mean it was scary, but it was a good scary.”

Overnight, they had to go from being not only his parents but also his nurse, pharmacist, and his respiratory therapist. He began to thrive at home. His hernia is now repaired, but Cayden still relies on a ventilator for his breathing, and he gets fed through a tube. There’s hope he’ll breathe on his own someday. “There is no other place that I would like to see my son fight the fight he has fought than Nationwide Children’s Hospital.” He is looking forward to inspiring the marathon participants he meets to reach their fullest potential.