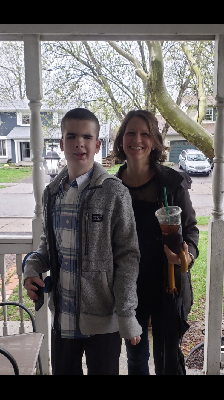 So proud of you Evan

Evan was born with many medical needs and has overcome more in his 17 years of life than most people will ever face in a lifetime. He is a resilient kid who has maintained a sense of humor amidst his challenges and has never let his disabilities stop him.

Evan was born blind and deaf in one ear and since then has never stopped fighting.

Throughout his life, Evan has had dozens of surgeries at Nationwide Children’s Hospital, including surgeries for his hands, feet, bladder, eyes, ears, and stomach. Just last year, Evan received a cochlear implant which has improved his ability to be successful at school and increase his independence and overall safety. More recently, Evan lost the light perception he had in one eye, and is now unable to see anything at all. While he has struggled with trying to be independent again, he has never once given up.

“Evan is definitely a fighter. I look up to him and admire him for being so brave. He has no fear. He will try anything. Nothing seems to keep him down,” says Tara, Evan’s mother. “It amazes me how he keeps his sense of humor even going in for surgeries. He always laughs and jokes with the nurses and doctors before going back and it’s the one thing that calms my nerves as a mother. He’s always the strong one! No matter what the obstacle or challenge is he comes out with a smile on his face.”

Despite his daily pain, Evan does everything a typical kid does! He swims, plays baseball, wrestles, rock-climbs, goes to dances, and participates in the Special Olympics. He listens to audio books, loves to travel, and play with his brothers and cousins. He enjoys playing games on his phone and interacting with his many electric computerized toys (robots).

“I cannot begin to tell you what this hospital means to us. From the day Evan was born, we have spent countless hours here. We are so extremely lucky and blessed to live so close. With the constant appointments, checkups, therapies, surgeries and testing we go through – everyone has helped Evan and given him hope. Every doctor we have ever seen has played such an important role in his life. They have helped him be the champion he is today,” says Tara, Evan’s mother.

The Section of Urology at Nationwide Children’s provides a full array of diagnostic and therapeutic services for an extensive range of urological disorders in children of all ages. From pioneering minimally invasive procedures to conducting bench research within The Research Institute, The Section of Urology is committed to the best outcomes for children everywhere.

Evan is familiar with the thrilling environment of races, having participated in a 5K himself where his mother pushed him the entire way through the finish line. Runners and Walkers who pass through his mile of the Nationwide Children’s Hospital Columbus Marathon & ½ Marathon can expect to find Evan with family and friends at his mile on race day. He is looking forward to cheering on all the racers including more family and friends.you for visiting my Children's Champion page. Did you know the purpose of the Nationwide Children's Hospital Columbus Marathon & ½ Marathon is to raise funds to support life-saving research and care?

When my son Evan was born I had no idea the medical struggles he was going to endure. We were so lucky to live close to Nationwide Children's and have the doctors and staff that would provide the medical care he would need for years down the road. He has had more surgeries than I can count in the past 16 years here.... not to mention tests, therapy appointments and check ups. I'm running the 1/2 marathon for Evan and for all of the patients who still manage to carry a smile on their face. I am amazed everyday by his strength and his ability to keep his sense of humor through it all. I strive to be a better person because of him

He has taught me so much in life and I'm so blessed to be his mother !

Please consider supporting the most meaningful marathon in the country by making a donation today.