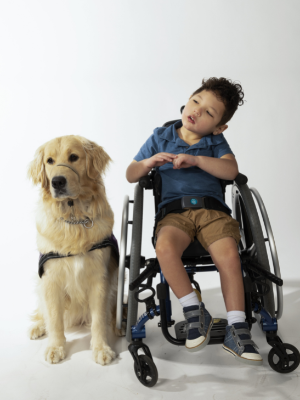 During a routine pregnancy ultrasound, Kai’s parents were told that a large amount of cerebrospinal fluid was found in his brain. Unsure of what caused this complication, they were immediately referred to Maternal Fetal Medicine for further evaluation. Kai was then diagnosed with Congenital Hydrocephalus.

After Kai’s birth, he was immediately taken by transport to Nationwide Children’s Hospital for brain surgery where a shunt was place d in his head. He spent a week under intensive care before being discharged. After further testing, Kai was diagnosed with Dandy-Walker Syndrome, a congenital condition where the cerebellum does not develop normally. Children with the condition may also have heart problems, face or limb defects or problems with vison and hearing.

At seven months old, he began having seizures and it became apparent that he did not have the ability to recognize objects and people. Further imaging and long-term EEG monitoring led physicians to the diagnosis of West Syndrome, an epileptic condition linked to infantile spasms. The eye clinic confirmed the extent of Kai’s visual impairment which led to his Cortical Visual Impairment diagnosis.

“Kai’s overcome so much already and continues to surprise us and his doctors with what he’s able to do every day,” says his mom, Amber. “We are incredibly grateful for all Nationwide Children’s has done for our Kai and have been nothing but impressed with the level of care he has received.”

Kai is currently non-verbal; wheelchair bound and explores his world mainly through touch and sound. He loves music, his favorite toy drum, and singing The Wheels on the Bus while doing the motions. But his favorite thing to do is play in the water.