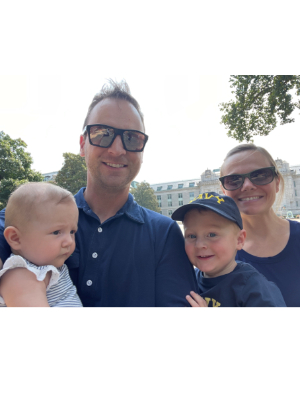 On February 20th, 2022, CDR Robert Keller will cycle 88 Km aboard the USS Jason Dunham in support of the Nationwide Children's Hospital NICU Unit and raising awareness to the difficulties our deployed military members endure.

On February 20th, 2021, my niece, Vera, was born with congenital Cytomegalovirus (cCMV). Prior to this, my family had never heard of cCMV. Vera was transferred to Nationwide Children's Hospital, and the staff provided amazing care--truly changing my family's lives which we are forever grateful for.

On top of this, the lifestyle of an active-duty military member can be very demanding. Rob's work schedule has called him away from his family for most of the year, only spending 88 days with his newborn daughter in 2021 and away for all of 2022. Currently on deployment aboard the USS Jason Dunham as the Executive Officer, the sacrifices he has made for our family are difficult to put into words. Even while deployed, he continues to be a selfless role model and looks for ways to help others.

Vera has successfully undergone her cochlear implants and surrounded by love everyday. Now is our chance to help others like Vera.

On Vera's first birthday, he will ride 88 Km in honor of each day he spent with his daughter. With limited bandwidth while underway, my brother has reached out to me to help spread awareness to his efforts. Please consider donating to Team Vera to help Nationwide Children's Hospital continue to provide the best help for children in need.

We invite anyone who wishes to join in the ride and support my brother's cause. Thank you all for your support and any donation to Nationwide Children's Hospital. I know it means the world to him and if he were here he would thank each of you.

All donations are tax-deductible and will be acknowledged by Nationwide Children’s Foundation.